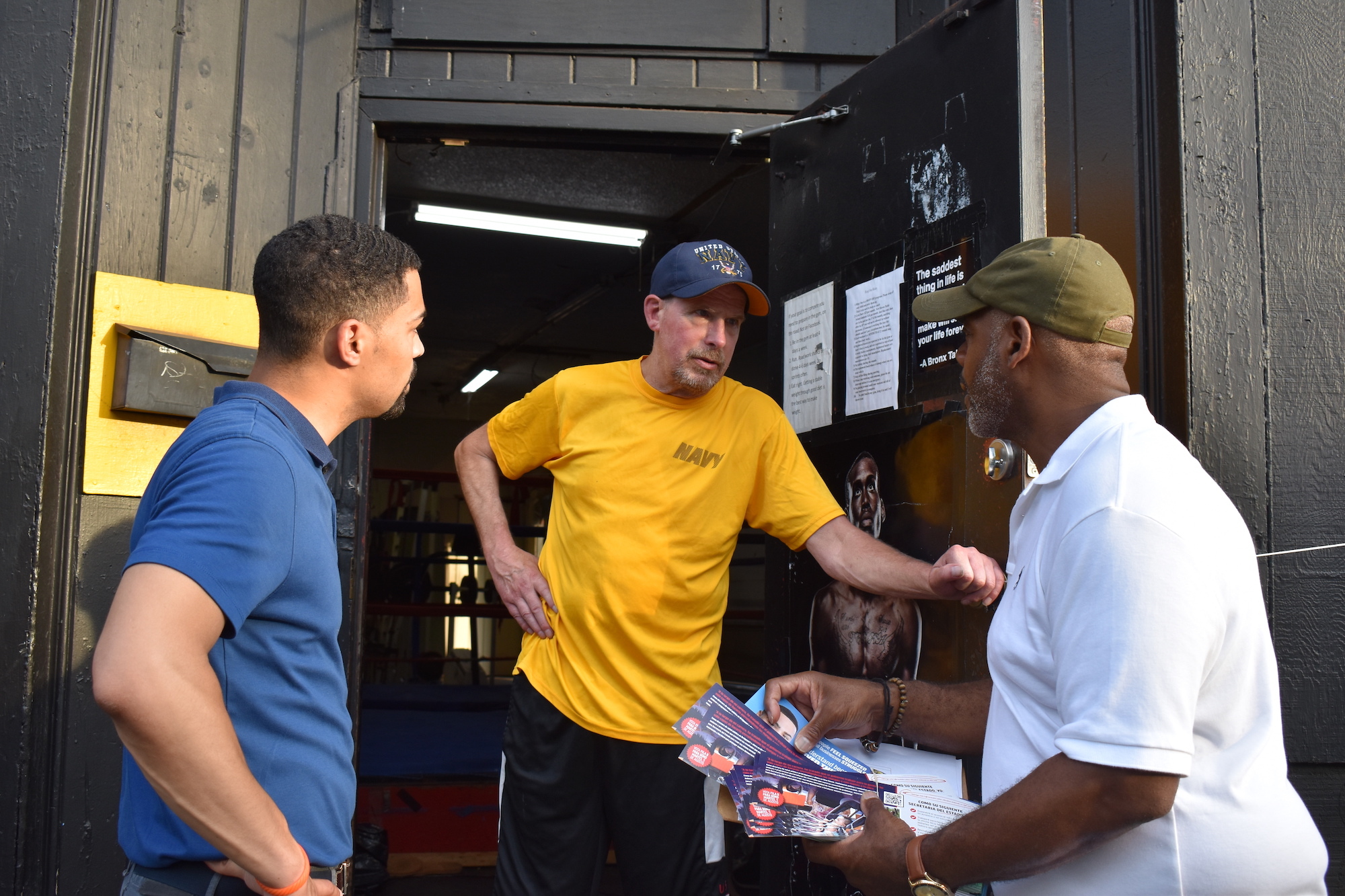 Twenty years have passed since Nakia Dawson-Douglas last saw Erick Russell – until Friday night when he knocked on her door.

Dawson-Douglas had known Russell as the kid who worked at the Fast Food Deli, the store of his parents, a neighborhood mainstay.

Now Russell is running for state treasurer — and he can count on Dawson-Douglas’ vote in Tuesday’s three-way Democratic primary.

The primary will determine who will run in November’s general election to seek a position overseeing Connecticut’s nearly $45 billion in pension fund and trust fund assets.

In the final days before the primary, Russell and DuBois-Walton hit local territory to reconnect with familiar local faces to make closing arguments about why they would best represent a progressive hometown agenda. (Click here for an article on the DuBois-Walton race; click here for more on the campaign of third-place candidate Dita Bhargava, a Greenwich-based quantitative hedge fund manager whose campaign was not visible in the region of New Haven-Hamden.)

As the sun began to set Friday evening, Russell, armed with a stack of flyers, went door to door on the Hill. Russell was joined on Friday by her husband, Chris Lyddy, and an old friend, Howard Boyd, who now chairs Hill North’s management team and knows exactly which doors to knock on for a reliable vote.

“ERICKDawson-Douglas shouted as canvassers knocked on her Hallock Street door, hugging the candidate. Dawson-Douglas had seen Russell’s name on lawn signs, his face on campaign flyers. She knew exactly why he had come to her door.

Russell didn’t need to launch into a list of his campaign priorities: ensuring pensions are fully funded, expanding financial education programs, launching a fund to help out-of-state abortion patients coming to Connecticut. He did not need to explain his background as a lawyer specializing in public finance.

Dawson-Douglas said he had already won his vote because ​“it’s him.

Most of Russell’s interactions with voters on Friday night went that way. ​“He comes from this community,” Boyd said by way of introduction. Russell asked callers if they remembered his parents’ charcuterie. He would emphasize that if he went to the treasurer’s office, he would represent the Hill community, thinking of families like his own and those of his former neighbors.

A resident told Russell she would vote for him just because he showed up on her doorstep. ​“At least we finally met someone,” she said, adding that politicians don’t usually focus on the Hill.

“Shit, he’s my guy,” another old friend said as he drove by. ​“I’ll get lawn signs and pass them around.

It doesn’t matter how much time has passed, Boyd said. ​“Once you’re on the Hill, you stay with family.

Russell presented himself as the best candidate to represent working families, with a perspective rooted in his own life experience. He was the first in his family to go to college and then to law school.

He now works as a lawyer at the firm Pullman & Comley, where he helps state and local governments fund infrastructure projects and address debt and pension issues. His legal and financial background is another factor that he says sets him apart from other candidates. ​“I had a very extensive financial background,” he said, ​“and that will allow me to get started from day one.

If elected, Russell has promised to expand financial literacy education across the state. He pledged to support the state’s new Baby Bonds program, establishing trusts for poor children. And he underlined a commitment to keep public pensions fully funded.

Russell also said he hopes to create a Safe Harbor fund for patients from states that restrict reproductive health care, so they can get abortions in Connecticut. He said he would fund the accommodation of these patients and fund the abortion providers who would care for these patients. ​“They will be poor women, women of color, members of the LGBTQ community who are most affected” by abortion bans, Russell said. He plans to work with Democratic state treasurers across the country to create a centralized system where patients seeking abortions can connect with a state willing to support them.

A former Connecticut Democratic Party vice chairman, Russell said he views his own candidacy as part of a larger fight against politicians who discriminate against people of color, gay people and poor families. Russell said he was partly motivated to run for office by a nationwide trend of far-right elected politicians speaking out or associating with bigoted views.

“We have seen unprecedented attacks on communities across the country,” Russell said. ​“We all need to come together and make sure we have the strongest possible ticket for November. »

Russell recently learned that if elected, he would be the first openly gay black politician to hold state-level office in the country. ​“I am proud to be a representative of the many communities I identify with,” he said.

Before heading to the gates on Friday, Russell and candidate for Secretary of State Maritza Bond were joined by the four Alders representing the Hill – Carmen Rodriguez, Evelyn Rodriguez, Kampton Singh and Ron Hurt – and members of the labor-affiliated activist group New Haven Rising for a canvassing kickoff.

Gathered in the field behind the Roberto Clemente School, Alders and union organizers reiterated their commitments to advocate for more jobs available to New Haven residents. They celebrated the Graduate Hotel’s recent voluntary recognition of its employee union. And they pitched Bond and Russell as candidates with New Haven roots and working families in mind.

Russell said he had lived all over New Haven in his life, including Fair Haven, Dixwell Avenue, City Point, and now Westville.

Boyd’s mother, longtime activist Ann Boyd, appeared at the event to support both candidates. She knew Russell when he was ​“very calm and hard-working child,” she said, and she trusts him now.

“People judge the area that [political candidates] come,” Ms. Boyd observed. ​“But they can’t do that – because look at the people coming out of here.