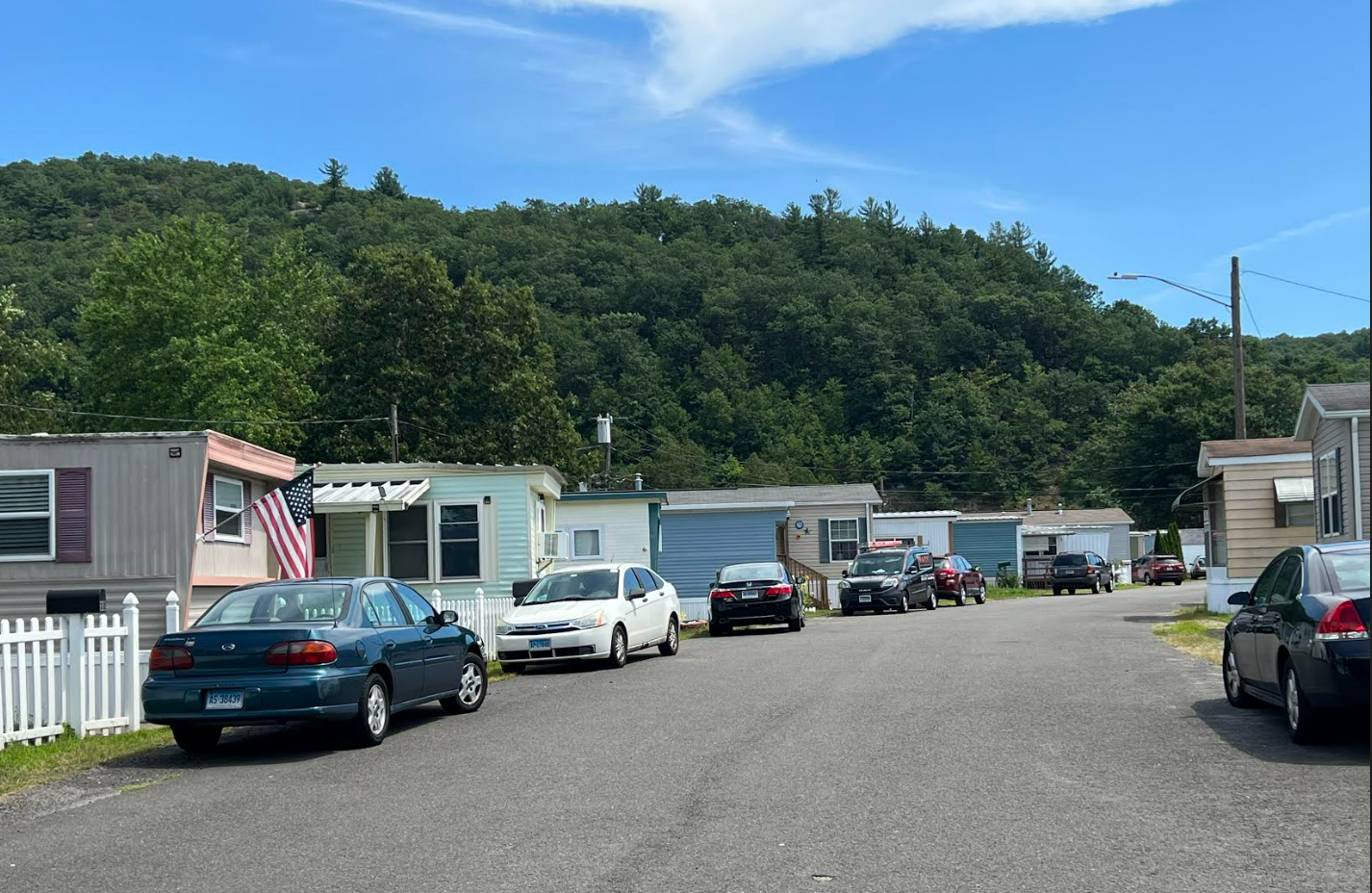 BEACON FALLS — Tenants in the River’s Edge mobile home community in Beacon Falls are asking the city to create a fair rent commission after community landlord Athena raised rents for tenants by $50 this year.

At a Board of Selectmen meeting on Monday, about 30 residents gathered in the town hall meeting room, where they briefed local political leaders on the rent increases and maintenance issues residents were facing confronted.

Colleen Dana, one of the leaders of the group behind the petition, told CT Examiner that their rent increases by about $10 a year. In the past three years since Athena bought the park in 2019, she said, rents have gone up by $125.

The River’s Edge experiment has become part of a national pattern of large investment firms buying up mobile home parks, raising rents and sometimes cutting services. Park residents — many of whom are elderly and on fixed incomes — are struggling to afford rent increases.

Last week in Killingworth, residents of Beechwood Mobile Home Park, which is home to people aged 55 and over, held a meeting where they called on Senator Richard Blumenthal and local and state politicians to settle the rent increases and park maintenance issues. As in Beacon Falls, the meeting was spurred by what residents saw as outrageous rent increases.

On August 4, Blumenthal and a group of 16 other U.S. senators and members of the House of Representatives wrote a letter to the Federal Housing Finance Agency calling for more protections for renters in mobile home communities. The letter said that many of the investment companies that purchased these communities funded the purchase through Freddie Mac and Fannie Mae, federally sponsored companies.

The letter urged the agency to consider measures such as requiring public disclosure of which companies used public funding to buy parks, tougher penalties for companies that violate tenant protections, requiring stronger protections against evictions and the right of tenants to buy their mobile home park before an exterior. society.

Meanwhile, residents of Beechwood and now River’s Edge are demanding the establishment of a fair rent commission in Killingworth and Beacon Falls. The commission is a group of volunteers who have the power to hear complaints and decide if a rent increase is excessively high. It also takes into account whether the owner has kept the property in good condition.

A law passed earlier this year requires Connecticut towns with populations over 25,000 to establish fair rent commissions. Killingworth and Beacon Falls, however, are too small to fall under this law, which means residents must convince city officials to write an ordinance to create a commission.

Killingworth first coach Nancy Gorski said she was already planning to set up a commission in the town, which she said could be approved by other coaches as early as September.

At Monday’s meeting, first selector Gerard Smith told residents that he plans to have the city’s legal department look into what it would take to create a fair rent commission in the city, and that he would put it on the agenda for the September board meeting. Meet.

On Saturday morning, park residents gathered in the grass by the creek that gives the park its name. They brought folding chairs or sat at the only picnic table by the creek. Boxes of donuts were spread out on a nearby table.

Dave Delohery, president of the Connecticut Manufactured Homeowners’ Alliance and a resident of the Cedar Springs mobile home community in Southington, spoke to residents about the options they have for dealing with rent increases and how they could file complaints with from the Department of Consumer Protection if they had maintenance issues in the park.

“Fair rent commissions are not magic. They don’t reimburse everyone’s rent. But they have the power to look at a rent increase and say, is it so important or so unfair that it’s harsh and unconscionable,” Podolsky said.

John Dwyer, a park resident who lives with his 80-year-old mother, Kathy Dwyer, told CT Examiner that rents have increased by $50 a year over the past two years.

John said rising rents made them feel the pinch of their budgets, especially with gas prices, as he had to drive to work. He works part-time at Stop and Shop and lives with his mother to take care of her.

Colleen Dana, who helped organize Saturday’s meeting, said she’s been working with Delohery since she received a notice in June that rent was increased by $50 that year. Dana bought the caravan she currently lives in in 2017. She has a bad back, she said, and knew she would have to go on disability – even with a mortgage, the caravan still cost her less than a one bedroom apartment.

Dana said between rent and mortgage, she currently pays $875 a month. She said that if the rent goes up more, it could mean she has to cut other expenses, like food or internet. She said she had already started washing clothes at her sister’s house.

“It’s a little unnerving,” she said. “If I had known this was coming, I would have bought elsewhere.”

Kathy Johnson, a former elected premier from nearby Oxford, said her son, who has a brain injury, lives in the park, where she and her husband own a trailer. She told Monday’s meeting that her son was paying out of pocket so she and her husband could afford him to stay there.

“Demand at River’s Edge MHC remains high with 100% occupancy and no homes for sale. We strive to offer clean, safe and reasonably priced rentals. We’ve made improvements to River’s Edge since we’ve owned it and addressed maintenance issues in a timely manner,” O’Brien said.

“It was our affordable accommodation”

Residents at the meeting also complained of multiple maintenance issues, including roads that had potholes, poor water pressure in the park, and company rules prohibiting hookups. a washer or dryer.

Brittany, who is 34 and lives in the park with her partner, said the cost of running eight loads of laundry at the laundromat has gone from $8.25 to $10. She said she had to limit how often she washed her clothes.

“I go there every two weeks because I can’t afford [it],” she says.

“It was our affordable housing. We couldn’t get a mortgage then and we were trying to be smart young adults,” she said. “It’s not worth it. I have regrets.”

Until then, Brittany says, she had been able to be a “housewife,” but she was now at the point where she might have to look for a job. She said she had to ask her parents and the parents of her partners for help.

Still, Brittany said it wasn’t so bad for her — she could work if she needed to. It was the elderly residents who were not able-bodied who worried him the most.

Theresa Linnartz, mother of a 13-year-old boy and a 3-year-old boy, lives with her father in his trailer in the park. She told CT Examiner that when she tried to put up a ramp so her dad, who uses a walker, could get from the ground to the trailer entrance, but park management told her he it had to be a specific type of ramp. She said the ramp management told her to put up damaged the floor, which now had a large hole in the floor near the door, and water seeped into the trailer when it rained.

Park manager Mark Kudasik, who was present at Saturday’s meeting, offered to draft a complaint form that tenants could fill out and return to him, which he would then drop off at the office.

Kudasik said that, contrary to what some residents have claimed, the park does not have septic issues. He said a resident had a pipe that needed replacing, but there was no septic tank “leaking out of the ground”. He said the company had to pump every year in September.

When asked to list the improvements made to the park since taking over Athena, Kudasik said the company had set up an office, put a terrace on the building and installed cladding. He admitted that these improvements did not directly affect the residents.

Athena did not return a CT Examiner request for comment on whether it had made any improvements to the park. The company also did not respond to questions about specific complaints from residents at the time the story was published.

At Monday night’s meeting, residents raised similar issues, including low water pressure in the park and electric meters which Randy Karpenkls said were mounted on rotting boards and could ‘burst into flames’ .

“You have to time your showers,” another resident said, referring to the water pressure, “and the best time is, like, two in the morning.”

Smith said he wasn’t sure what the city could do to address the park’s maintenance issues because the land is privately owned. But he said if there was a way to solve some of the problems, he was open to it.

“Give us 30 days to go through it, figure it out, get it so we get it right the first time,” he said. “I understand this is a sensitive matter that needs to be addressed immediately.”