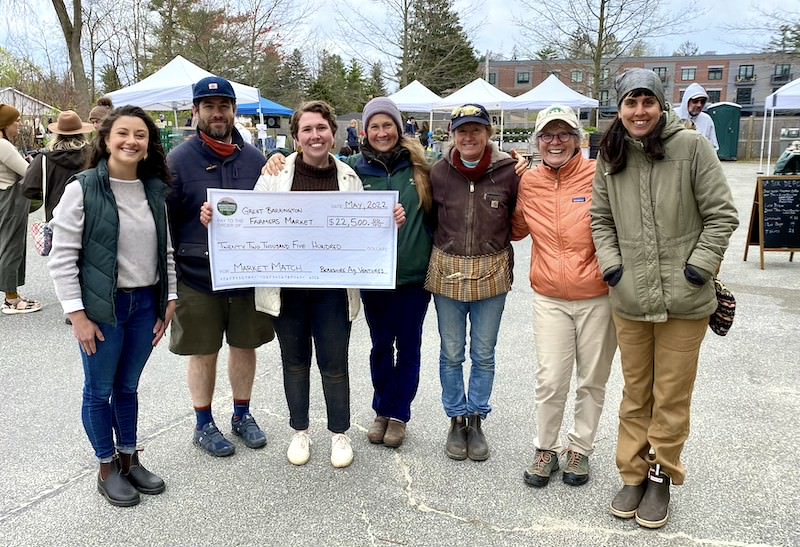 The Fund is an economic development and food access initiative that provides funds to increase the impact of Supplemental Nutrition Access Program (SNAP) benefits in farmers’ markets across the region. It provides funds to marketplaces to offer SNAP $1-for-$1 matching up to $30, giving SNAP recipients a total of $60 to spend at each participating marketplace. With continued community support, BAV hopes to increase the limit to $30 in the future.

GREAT BARRINGTON — Berkshire Bounty announced the hiring of Morgan Ovitsky as its first executive director. Ovitsky comes to Berkshire Bounty from Be Well Berkshires, a Mass in Motion-funded initiative that supports equitable access to healthy food and opportunities for physical activity. As project coordinator, she facilitated the Berkshire County Food Access Collaborative, a multi-sectoral collaborative platform to examine the region’s specific strengths and challenges in accessing local food.

Ovitsky takes the helm of the Berkshires nonprofit with a deep knowledge of the food and nutrition challenges facing families in the region, and his vast connectional capital in the world of food safety. of the Berkshires will give him a platform from which to jump into Berkshire Bounty’s role as a food relief organization dedicated to addressing food insecurity.

A member of the steering committee of the Downtown Pittsfield Farmers Market, the Healthy Pittsfield Partnership and the Age Friendly Task Force, Ovitsky said, “I believe access to nutritious food is a human right. Through my previous involvement with the Berkshire County Food System, I have a good understanding of our community’s barriers and challenges to accessing healthy food.

Berkshire Bounty recently established a formal board of directors, an important step in ensuring the sustainability of the nonprofit organization into the future. One of the first decisions of the board of directors was to hire a general manager.

Matthew Tekin was promoted to Assistant Vice President, IT Security, Audit and Infrastructure. In his new role, he is responsible for developing and maintaining IT policies, procedures and practices and developing an IT security strategy to ensure the security of member and employee information.

John Masten was promoted to Vice President, Compliance. His new role is to provide strategic leadership around Greylock’s compliance with state and federal laws, rules and regulations that impact operations.

Jenay Simon was promoted to Vice President, Operational Risk. In her new role, she provides strategic leadership for Greylock’s enterprise risk management program and ensures the safety and soundness of Credit Union.

Shenna Brady was promoted to vice president, e-commerce. In her new role, she aligns strategy and leads research for digital channels and manages strategic projects for the organization.

Marc Kaley was promoted to Assistant Vice President, Contact Center. He joined Greylock in 2008 as Contact Center Manager. Mark manages a team of 12 employees who are responsible for over 90% of inbound phone calls to Greylock.

Michael Parrino was promoted to assistant vice president, consumer credit. He began his career at Greylock in 2017 as Senior Loans Officer after more than 24 years at Landmark Credit Union, where he served as Director of Loans.

Andrea MacArthur was promoted to Vice President, Mortgage Advisor. MacArthur joined the Bank shortly after graduating from college in 2002. She started in mortgage servicing with no previous experience and was able to learn quickly, offer ideas and suggestions, and adapt to the change. She has held a number of positions throughout her tenure at the Bank, including Loan Processing Manager, Loan Closing, Closing Manager, Retail Department Manager and most recently Advisor. in mortgages in the Berkshire county market. MacArthur graduated in 2016 from the Connecticut School of Finance and Management.

John Staff was promoted to Vice President, Wealth Manager and Administrative Coordinator of Trusts. Stapf has been with the Bank for almost 12 years and plays a key role in the financial management of the Wealth Advisory department. She graduated in 2019 from the Connecticut School of Finance and Management and is currently a member of the Bank’s Leadership Development Program. Stapf’s most recent achievement is being awarded the Chartered Specialist in Fiduciary and Investment Risks (CFIRS) designation upon successful completion of an intensive three-year program.

MONTEREY — After 12 years as chairman of the Bidwell House Museum board, Rob Hoogs completed his final term on May 21 and was honored by the board for his service.

In 2007, Hoogs worked with former director Martha Dailey on a land history and mapping project, then joined the board in 2008. He was elected president in 2010. During his tenure, he guided the Museum through a fundraising campaign; a multi-year renovation and preservation project; the creation of the Native American Interpretive Trail; an expansion of the Museum’s online and off-season programming; and the completion of a conservation restriction on 180 acres of the property. He has donated hundreds of hours of his time working with various board committees and, along with his wife Cindy, has spent many hours working in the gardens and grounds.

To thank Hoogs for all he has done for the Museum, the Board decided to name the newly renovated coachhouse in his honor and presented him with a plaque on May 21.

Diane M. Austin was elected as the new Board Chair at the May 21 meeting. Austin spent 25 years as Vice President of Student Affairs at Lasell College before retiring in 2019. She joined the Bidwell House Museum Board of Trustees in 2017 and has been active in program planning and fundraisers.