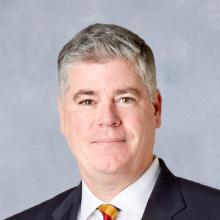 The award, created by the non-profit Main Street Waterbury, celebrates the leadership and contributions of the late Stephen R. Sasala, former CEO of the Waterbury Regional Chamber and former Chairman of the MSW Board of Directors. It is presented to a commendable individual whose initiative, leadership and personal commitment embody the spirit of partnership and community engagement.


O’Connor is responsible for market growth in all of Webster’s business segments in the Western Connecticut region. In addition, he is responsible for all aspects of Webster Bank’s corporate and retail real estate portfolio of 180 buildings and approximately 1.3 million square feet, including the buying and selling of real estate, site selection, occupancy planning, lease negotiations, lease administration, design and construction, procurement, physical security, energy management and Webster’s sustainability program .

O’Connor is a retired United States Army officer, having completed 15 deployments to Africa, Asia, Central America and Eastern Europe. Mike won the Bronze Star for his service in 2004 while serving in combat in Afghanistan as a member of 3rd Battalion, 3rd Special Forces Group, Airborne. He is a member of the Boards of Directors of the Waterbury YMCA, Palace Theater, Waterbury Development Corp, Waterbury Police Activities League and Saint Mary’s Hospital Foundation. Mike was United Way’s 2019-20 Campaign Chair.

Northwest Community Bank and its divisions recently contributed a total of $ 40,000 to local nonprofit organizations. Donations of $ 10,000 each were made to the American Mural Project, Susan B. Anthony Project, KidsPlay Children’s Museum and Favarh (Arc of the Farmington Valley) – participants in the Connecticut Neighborhood Assistance Act tax credit program.

Northwest Community Bank President and CEO Stephen Reilly says, “We know the challenges facing nonprofits today and understand the significant impact the pandemic has had on them. Our contributions express our appreciation and help organizations fulfill their missions within our community.

Altrin Elmazi, has been promoted to vice president, responsible for information security. He joined the bank in 2017 and has since excelled in his previous role as Systems Security Manager. In his new role, he oversees and supports the bank’s information assets using his vast experience and expertise in cybersecurity and business information security to ensure best practices and policies are put forward. He is recognized as a Certified Banking Security Manager from the SBS Institute and he obtained a BS in Computer Science and a Minor Diploma in Management Information Systems from Central Connecticut State University.

Whitney Cadett has been promoted to vice president, responsible for marketing. Cadett joined the bank over three years ago, bringing previous experience working at another financial institution. She oversees the strategic marketing plan and has been successful in attracting more of the Bank’s target demographics, while coming up with new ideas to improve revenues, control spending and use resources efficiently. Whitney is active in the community and sits on several boards, including the Children’s Community School and St. Mary’s Hospital Foundation, and is a member of the Young Professionals of the Waterbury Region (YPOWR). She holds a bachelor’s degree in communications with a minor in business administration from Eastern Connecticut State University and an MBA with a concentration in marketing from Post University.

Marilyn Perzan, has been promoted to Assistant Vice-President, Branch Manager. Perzan joined Thomaston Savings Bank in 2011 as a mortgage maker. Marilyn brought with her decades of experience in mortgage management and retail banking. She moved to Retail Banking several years ago, managing some of the bank’s largest offices. Marilyn is responsible for managing the Terryville and Oakville offices.

Antonella Calabrese, has been promoted to Assistant Vice President, Branch Manager. Calabrese joined the bank in 2019 as branch manager of the new Farmington branch. She brought to the team an in-depth knowledge of Farmington’s business and commercial customers. Antonella will be responsible for overseeing the Farmington and Unionville branches.

Marci Neri has been promoted to Assistant Vice President, responsible for human resources. She started her career at Thomaston Savings Bank in retail banking in 2000. She was then transferred to the Human Resources department where several promotions followed until her current position as Human Resources Manager. Marci is responsible for the administration and supervision of human resources programs and staff.

Renee Russell, has been promoted to Assistant Vice President, responsible for BSA. She joined the Bank in 2019 bringing extensive experience in the area of ​​the Bank Secrecy Act (BSA). In her new role, Renee is responsible for carrying out tasks associated with the accuracy and effectiveness of our BSA, anti-money laundering and Office of Foreign Assets Control (OFAC) activities.

Chad Bélanger has been promoted to Assistant Vice President, Treasury Analyst. He has been involved with the Bank since high school, participating in the school-to-career pilot program. He returned to the Bank in 2011 after graduating with a bachelor’s degree and had held his previous position as a junior treasury analyst since 2018. In his new role, Chad performs analysis and makes recommendations on various treasury activities as well as asset assistance / liability management.

Antonio Ponte, has been promoted to Assistant Vice President, Small Business Lender. Ponte has years of experience as an entrepreneur in retail and real estate. He joined the Bank in 2014 and has been successful in his previous role, cultivating new business relationships and playing a pivotal role in handling the high volume of PPP loans.

Michael Dayton, has been promoted to Assistant Vice President, Small Business Lender. Dayton joined the Bank in 2016 as a branch manager for the opening of the Oakville branch. He then moved on to business development positions in commercial lending and helped lead the Bank’s cash management initiatives.