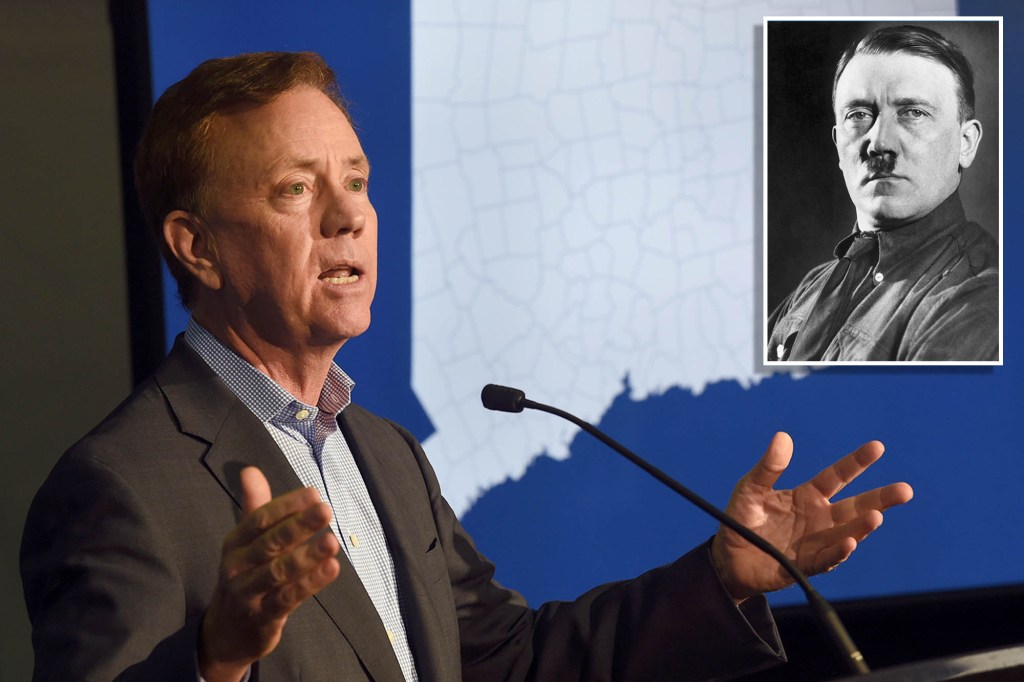 State Representative Anne Dauphinais, a vocal critic of Lamont, compared the Democrat to the genocidal dictator who killed millions of European Jews and others between 1933 and 1945 over Lamont’s COVID-19 vaccine policy for government employees, the Hartford Courant reported.

“King Lamont aka Hitler dictating what we must inject into our body to feed our family!” Dauphinais wrote in a response Thursday night to a Facebook post by CT News Junkie.

The outlet was reporting on Lamont’s requirement that state employees be vaccinated against the deadly virus or undergo weekly tests. Some 2.2% of state officials failed to comply with the warrant, the outlet reported.

The Dauphinais then doubled in a later Facebook post Friday, saying Lamont called on vaccinated people to discriminate against their unvaccinated counterparts.

“Separating ourselves from our workplaces, forcing people to make unwanted medical choices in order to keep their jobs, pay off their mortgages and feed their families,” Dauphinais wrote in a long article. “It is no longer the land of the free.”

Dauphinais claimed his remarks were neither anti-Semitic nor factually inaccurate, insisting that Lamont used “dictatorial powers” to force healthy children to wear restrictive and “dehumanizing” masks in schools although they are “minimal propagators” of the virus that killed more than 713,000 Americans on Monday.

“This governor, with the help of the one-party rule that we have in this state at the moment, seized dictatorial powers for almost 2 full years after the expiration of this last extension,” Dauphinais wrote. in the message. “Hitler was also a dictator authorized by the One Nazi Party regime. “

Le Dauphinais also accused Lamont of using his office to force state agents to take the “experimental” vaccine with unclear side effects while calling on those who comply with others who do not. .

“This dictatorial madness must end,” wrote Dauphinais, a Republican who represents the towns of Killingly and Plainfield.

“Nonetheless, I want to take this opportunity not to apologize but to clarify to Governor Lamont, as I was not clear that I meant he was acting like Hitler in the early 1930s – to this day he doesn did not call for putting the unvaccinated in camps. ”

The Dauphinais declined to give details when he was reached on Saturday, Le Courant reported.

Lamont’s communications director told The Post on Monday that the Dauphinais’ comments were “disgusting, repulsive and disrespectful” to Holocaust victims.

“The representative’s comments are disgusting, repulsive and disrespectful to the history and memory of the victims of the Holocaust. Such anti-Semitic rhetoric has no place in state government, nor in our public discourse. “

“To compare our governor to Hitler is offensive and ignores the evil of the Holocaust,” said ADL Connecticut director Steve Ginsburg. “We call on Representative Dauphanais to apologize and educate herself so that she can understand the harm her words cause. Such reckless analogies on the part of an elected official exploit the experiences of Holocaust survivors, and they belittle and delegitimize the memory of the victims. “

State House Speaker Matt Ritter called Dauphanais’ comments anti-Semitic while comparing them to another statement made last month by Representative Gale Mastrofrancesco (R-Wolcott) on the floor of the House when she invoked George Floyd’s final words – “I can ‘Don’t breathe’ – referring to mask requirements, CT News Junkie reported.

“This is part of a disturbing trend on the far right to abandon decency, decorum, facts and history for offensive, racist and anti-Semitic rhetoric,” Ritter said in a statement. “Representative. The Dauphinais’ occasional comments on Hitler – attached to Representative Mastrofrancesco’s recent ground speech comparing wearing masks to the murder of George Floyd – are to be called out by other Republican members of the General Assembly. Republicans must be called upon to stand by. look in the mirror: is this your party?