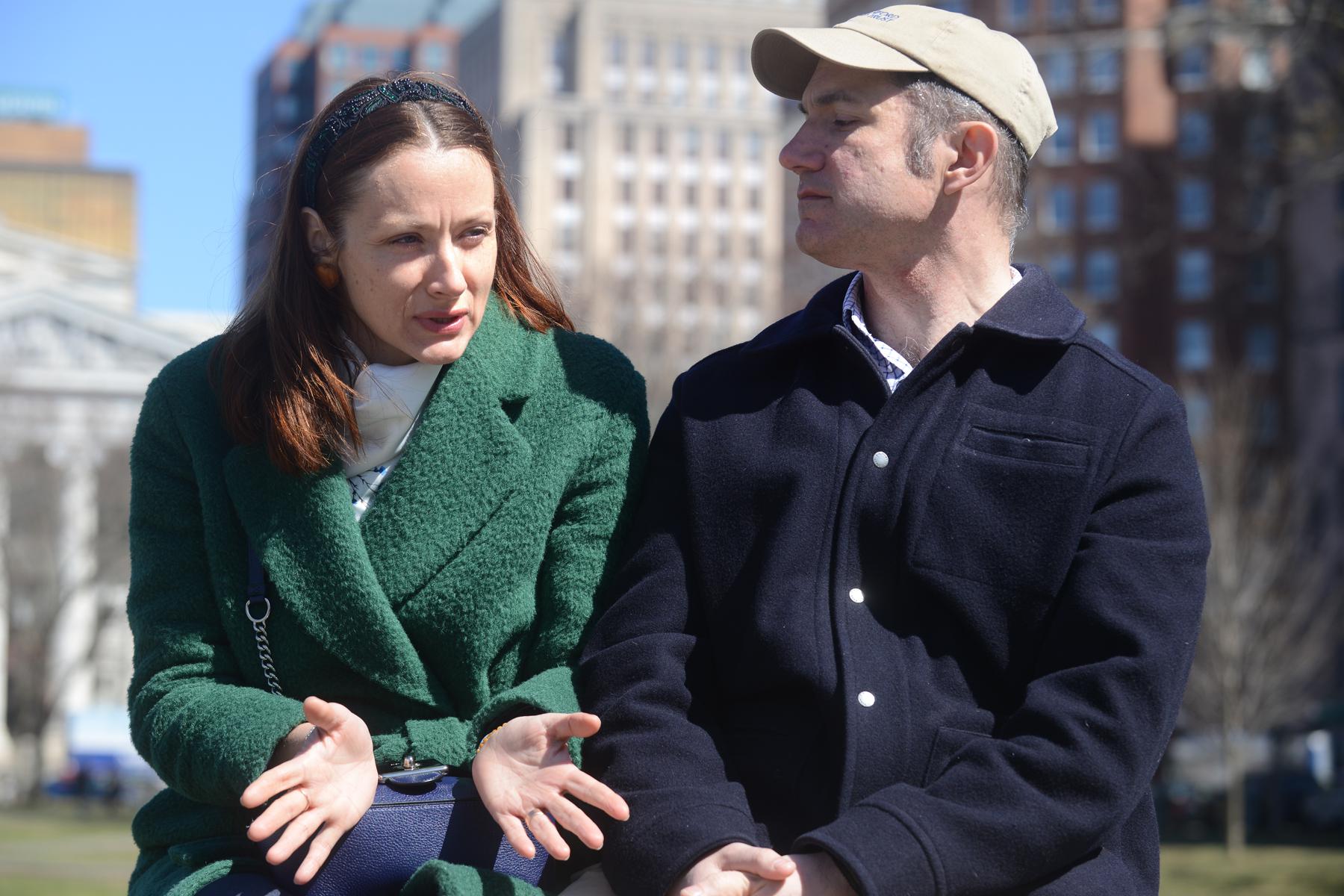 BRANFORD — When your parents live in a war zone, it’s personal.

So Iryna Solomko and her husband, Adrian Bonenberger, decided that they had to get her parents out of kyiv, the capital of Ukraine, once the Russians invaded, even though her parents didn’t want to leave.

“Eighty percent of the Ukrainian population refused to believe that Russia would attack kyiv,” Solomko said. “Like old people, they get used to their lives.”

Bonenberger, editor of Yale Medicine Magazine, said he knew it would take a trip to Ukraine to bring his wife’s parents to the Connecticut couple’s home in Branford.

“I knew we had to go to Ukraine together, because that was the only way for them to come, it was for us to go and say, ‘we’re here and we’re not leaving without you’, how they would come to us or we would find a way to bring them to us. They arrived on March 16.

While there, Bonenberger, a former U.S. Army captain and Afghanistan War veteran, helped train Ukrainian civilians to help defend their countrywhich he says was the best experience of his life.

Solomko’s background also complicates matters. Her mother is Russian; her father is Ukrainian. “I’m ashamed to be 50% Russian,” she said. Her mother said she was also ashamed of her background, Solomko said.

Bonenberger said there is a “special connection that Ukrainians feel with the land, especially people of his parents’ generation”, because many are farmers “and also because they live with the memory of their parents and grandparents, from whom their land was taken in the USSR and collectivized Owning even an apartment or a dacha is “incredibly meaningful” for Ukrainians, he said.

Solomko doesn’t believe Putin will stop in Ukraine, but could hit Poland. And while Russian rockets would hit maternity wards and shelters, Russian soldiers would rape Ukrainian women. “It’s about these animals, who commit vulgar war crimes against humanity,” she said.

Solomko, who will become a US citizen on April 1, has faith in the people of Ukraine, who staged the Orange Revolution in 2004 and 2005 that overturned what was seen as a corrupt election, and who have been fighting since 2014, when Russia annexed Crimea. .

“I think they’re doing a really good job,” she said. “And I think it’s all about the bravery of the people,” she said. “We are doing it now, again, fighting for Ukraine…to be a European country, to be an independent country, not to be a servant of Russia.”

She said she has friends who joined the Territorial Defense Forces, “people who protect cities, and I’m proud of them and I believe in them.”

The couple met in January 2016 in Ukraine and married nine months later. Both are journalists, and Bonenberger was in kyiv as a writer and member of the Defense Council of the Truman National Security Project. He also wrote a memoir, “Afghan Post”, based on letters he wrote during two tours in Afghanistan.

“We met when she worked for Hromadske Radio, which is the Ukrainian version of NPR, basically,” Bonenberger said. “And I went on his program to talk about the 2016 election. And it was love at first sight. He’s an incredibly articulate and passionate person, a person of integrity, and it’s rare to find people like that n anywhere.

During the two weeks they recently spent in Ukraine, waiting to get Solomko’s parents out of the country, she helped get medical supplies from Lviv to Kyiv and nearby towns, where they were needed most. .

Bonenberger, along with two friends, Matt Gallagher and Ben Busch, helped train members of the Territorial Defense Forces, which Bonenberger said started with 12,000 men and grew to 2 million, “citizens who basically enroll to the Ukrainian version of the National Guard”. The three friends were featured on CNN’s “Anderson Cooper 360°.”

“When we got there, it turned out… it was more like a local branch of the Territorial Defense Forces designated to specifically guard the city of Lviv, so it was a local city defense force, even less training, even less equipment, less of everything,” he said. They trained 55 men in base defense. “So we were able to teach the Ukrainians what to expect from the Russians when attacking, and therefore how to effectively counter these tactics.”

Ukrainians learned to enter a building in a stack formation, in which each man in single file has a specific task, turning left or right, communicating only by hand signals.

“Two weeks isn’t a lot of time to train anyone on anything,” Bonenberger said. “So we decided early on to focus on what we felt were the core of small unit tactics and leadership. … We felt that if we could effectively train people on those two things, they could naturally extrapolate a lot of other things that they would need to survive.

One of the goals was to teach Ukrainians to be able to tell if Russian troops were well trained, so they could avoid engaging with them, Bonenberger said.

They also taught the Ukrainians how to lead a squad, as well as basic medical training, such as how to apply a tourniquet and install hedgehogs, the steel objects that can slow down tanks. They also had 500 rounds of ammunition so they were able to teach the men how to shoot an AK-47.

Morale through the roof

“They did very well,” Bonenberger said. “They were some of the most motivated and disciplined interns I have ever met.” Unlike the American infantry, who Bonenberger says will complain about everything, he said, “These people didn’t do it. It’s not hyperbolic here: not a single complaint. Their morale was at its peak. And I think it’s because they’re defending their homes, they’re defending their land.

“As a civilian, as a citizen, as a veteran, training other citizens, other people with mortgages…training people like me was meaningful in ways that I cannot fully express,” did he declare. “And see them get into it. They did two months of training in two weeks because they were attached to it. … I was blown away by their incredible quality.

Bonenberger believes that Russia will lose the war, due to its lack of military strategy. “I believe Ukraine will win,” Bonenberger said. “I just don’t see how Russia has a military plan to subjugate Ukraine.”

In fact, he believes that Russia has already lost, since Putin no longer talks about his original goals. “He said, first and foremost, the most important political goal was regime change,” Bonenberger said. “He was going to get rid of the illegal government of Zelensky. He failed to do so. It’s not even something he talks about anymore.

Putin’s second goal, Bonenberger said, was “the denazification of the whole Ukrainian country, which would require him to take the whole Ukrainian country, and he doesn’t talk about that anymore either.” Ukraine has therefore already won the war as Russia defined it when it invaded. … Ukraine also won in the sense that it proved to the world that it is a country capable of defending itself against an army that the most serious analysts have described as one of the best armies in the world.

Bonenberger said that since Ukraine’s defeat by the Russians in 2015, “the Ukrainian military has taken those lessons to heart. It has incredibly capable generals and leaders and they are running a classic defensive campaign.

The Russian military, on the other hand, is “aimless and adrift”, he said. The world has overestimated Russian capabilities, Bonenberger said, because much of the Western analysis comes from those who want to sell arms to the US military.

“I knew the Russians weren’t as capable as Western analysts had claimed,” Bonenberger said. “I know this because I reported on the 2014-2015 Russian invasion.”