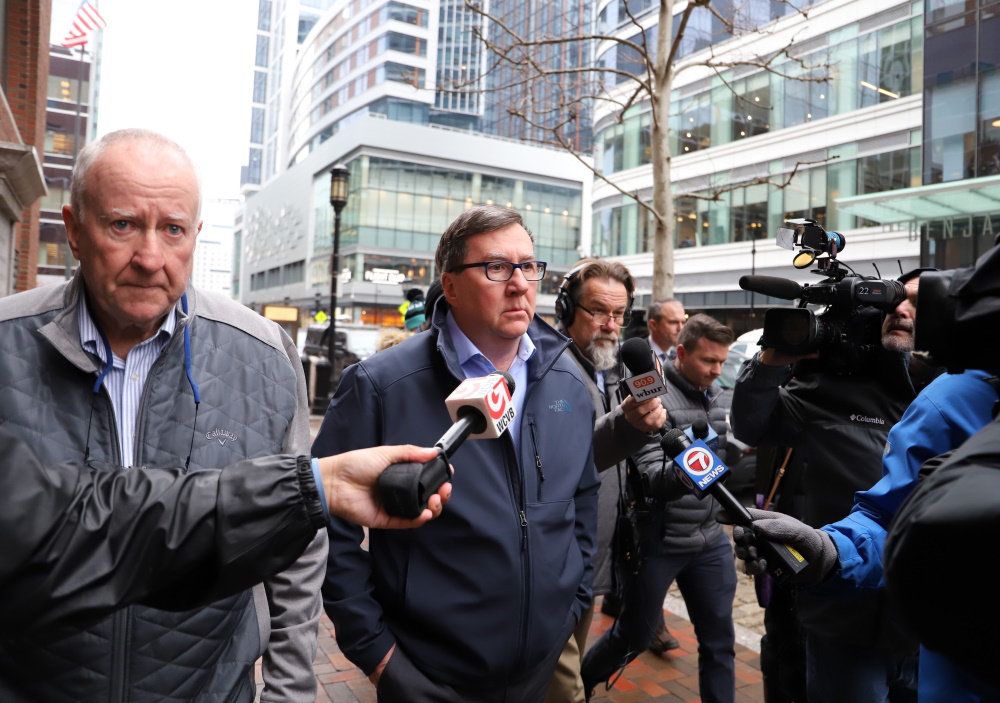 BOSTON (SHNS) – A federal judge on Wednesday sentenced former Representative David Nangle to 15 months in prison after Lowell’s Democrat pleaded guilty earlier this year to illegally using campaign funds to fund a lifestyle that included golf club memberships and trips to the Connecticut casino, and lying to banks about his debt to get mortgages and other loans.

Nangle, who spent 22 years in the Legislature, once held a prominent position in the House leadership under the leadership of former Speaker Robert DeLeo, but saw it all fall apart after being arrested in early 2020 and charged with a series of crimes, many of which stemmed from his gambling debts.

Prosecutors said during the period of their investigation, Nangle was heavily in debt and gambled at various New England casinos, using campaign funds to rent cars to go to casinos and even pay someone to Mohegan Sun to recover his earnings so that he does not have to pay income taxes.

U.S. District Court Judge Rya Zobel ordered Nangle to pay restitution of $ 33,347 to the Internal Revenue Service, and he will also lose $ 15,650.

After his prison term is over, Nangle will spend two years on probation.

â€œHe broke the law and violated his duty to voters – as chairman of the ethics committee, no less. This case is the latest evidence that this office intends to hold corrupt officials to account, â€said Nathaniel Mendell, the Acting United States Attorney for Massachusetts.

Prosecutors had requested an 18-month jail sentence for Nangle, but former lawmaker lawyer Carmine Lepore asked the court to let her client serve 12 months of house arrest and three years of supervised release instead.

Lepore, according to CommonWealth Magazine, wrote that Nangle was “an efficient, diligent, caring and loyal representative of his constituents” driven to his crimes by a gambling addiction for which he was treated after his arrest.

Zobel’s decision to sentence Nangle to a substantial prison term should send a message to “corrupt public officials who attempt to undermine the integrity of our government,” said Joseph Bonavolonta, special agent in charge of the FBI office in Boston.

â€œState legislators are elected by the people, to serve the people, not to serve their own financial interests like David Nangle did. Mr Nangle betrayed the confidence of his constituents and broke the law, knowing full well that what he was doing was wrong, â€Bonavolonta said.

A year after his first arrest at his home in Lowell, Nangle pleaded guilty in February to 23 counts of bank fraud, tax evasion and embezzlement of campaign funds to pay dues at a local golf club, rental cars, flowers for his girlfriend, gasoline, hotels and restaurants.

He also admitted hiding debts from the banks to secure a mortgage and three home equity lines of credit totaling $ 115,000 and filing false income tax returns for five years.

All of this took place while Nangle represented the 17th District of Middlesex in Lowell, rising under DeLeo to chair the House Ethics Committee and ultimately becoming a member of the Speaker’s leadership team as one of the four floor division presidents.

Following his arrest in February 2020, Nangle resigned his House leadership positions but remained in the House and vowed to fight the charges against him. He ultimately lost his candidacy for re-election to Representative Vanna Howard.

A spokeswoman for House Speaker Ron Mariano did not offer immediate comment from Democrat de Quincy, who served many years in the House and in Nangle’s leadership.

As part of his plea, Nangle agreed to waive his right to appeal any sentence of 30 months or less in prison, and the government waived his right to pursue charges of obstruction of justice or extortion related to an alleged “stream of benefits” that Nangle received from an anonymous partner who owns a Billerica company.

Investigators allege that Nangle assisted business owner Billerica by sponsoring and pushing through legislation to benefit one of his clients in exchange for $ 27,000 awarded to a “fictitious consulting contract.”