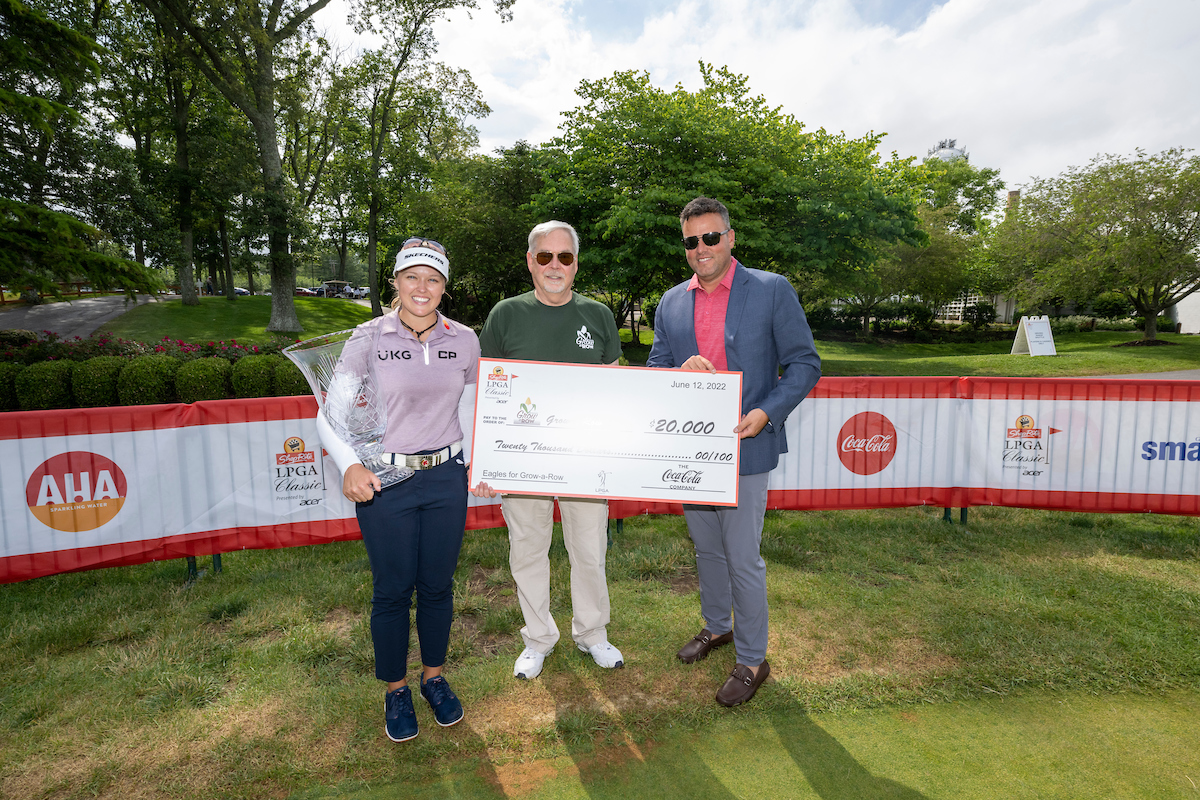 Winners of this year’s ShopRite LPGA Classic presented by Acer include America’s Grow-a-Row, the New Jersey agriculture and hunger relief organization which received a $20,000 donation from The Coca-Cola Company during the tournament last week.

Coca-Cola, a major sponsor of the ShopRite LPGA Classic presented by Acer, donated $20,000 based on the number of Eagles golfers shot during the weekend’s three-day tournament at the Bay Course at Seaview in Galloway.

Eagle, as defined in golf, is a score two strokes under par on a hole. A Pittstown-based Grow-a-Row representative accepted the check on Sunday accompanied by 2022 ShopRite LPGA Classic Champion Brooke Henderson.

A total of 25 eagles were recorded over the three days of competition at the ShopRite LPGA Classic, highlighted by Henderson making an eagle on the first hole of the playoffs to win his 11e LPGA Tour event.

The 144-player field competed over three rounds for a $1.75 million purse, and the event itself generated an additional $1.5 million to benefit dozens of community charities that help people in need.

Grow-a-Row provides 2.5 million pounds of free fresh fruits and vegetables each year to food banks and food insecure people, with the help of more than 9,000 volunteers who harvest, save and deliver the products.

For every Eagle made by golfers during the weekend tournament, Coca-Cola has pledged $800 to the farm, with a total of $20,000 for Grow-a-Row.

“Congratulations to Brooke Henderson, 2022 ShopRite LPGA Classic Champion, and everyone who helped make this tournament a successful event for golf and the wider community,” said Mike Cassara, Senior Vice President of North Zone Customer Leadership & Retail for Coca-Cola North America. “We are proud to support America’s Grow-a-Row and hope this contribution will help the organization in its fight against food insecurity within the local community.”

“We are grateful to Coca-Cola and ShopRite for supporting our organization. This money will help us expand our reach, produce more food and feed more people,” said Chip Paillex, president of Grow-a-Row in the United States. “We are honored to be here today to celebrate all of the champions on and off the course who are fighting hunger in our communities.”

Recently, representatives from dozens of charities and community organizations received grants totaling $1.5 million at a special luncheon at the LPGA.

The ShopRite LPGA Classic is supported by more than 450 companies, and money raised through the LPGA is distributed by ShopRite Partners In Caring and Wakefern Food Corp. to non-profit organizations at the annual luncheon.

“The support and charitable contributions from ShopRite, Wakefern and participating sponsors like Coca-Cola on Tour are so important and a key part of what makes this event special,” said Tournament Director Bill Hansen.

Sunday’s final tournament aired live on the CBS Television Network and streamed live on Paramount+, marking the first time in tournament history that the ShopRite LPGA Classic has aired on network television.

ShopRite is the registered trademark of Wakefern Food Corp., a retailer-owned cooperative based in Keasbey, NJ, and the largest supermarket cooperative in the United States.

Through its ShopRite Partners In Caring program, ShopRite is dedicated to ending hunger in the communities it serves.

Since the program began in 1999, ShopRite Partners In Caring has donated nearly $50 million to food banks that support more than 2,200 worthwhile charities.

As title sponsor of the ShopRite LPGA Classic presented by Acer, ShopRite has donated $40 million to local organizations, hospitals and community groups.