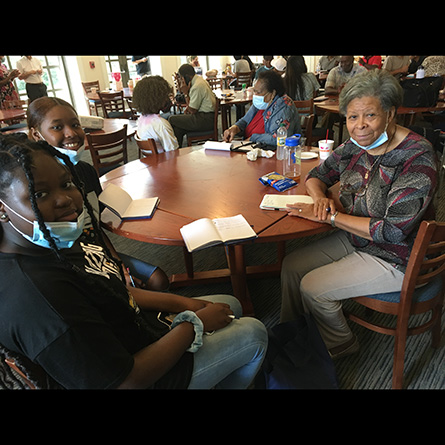 A collaboration between Connecticut College and the New London community brings the past and present closer together, in the hope of a fairer future for residents of color.

The Connecticut College initiative is part of “Crafting Democratic Futures: Situating Colleges and Universities in Community-based Reparations Solutions,” a three-year collaborative project supported by a $ 5 million grant to the University of Michigan in the United States. Andrew W. Mellon Foundation. The goal of the project is to bridge the gap between colleges and communities and explore reparations for African American and Indigenous communities.

William Meredith, Nakia Hamlett Assistant Professor of Psychology and Faulk Foundation Professor of Psychology Jefferson Singer, the principal investigators of the $ 275,000 grant at Connecticut College, matched high school students with people of color in the community to conduct interviews on residents’ experiences with systemic racism and discrimination.

Throughout the project, stories drawn from these interviews will be collected and analyzed by Hamlett and Singer, with the help of undergraduate students. These analyzes will be shared with their community partners with the aim of disseminating the results to the wider New London community in a variety of public places and formats.

â€œFrom its inception, we thought of this as a community project,â€ explained Hamlett. â€œIt motivates our focus, because we want something that will have concrete action. “

Community partners working with Conn include New London Public Schools, the City of New London Church, Shiloh Baptist Church and the retired Executive Director of the Jewish Federation of Eastern Connecticut. In early discussions between the College and these community leaders, a main issue of inequity was often addressed: historic redlining – the systematic denial of the right to vote of communities of color by denying them mortgages and other financial support.

It is believed that the results of interviews with people who have experienced redlinings in New London could lead to reparations initiatives, whether working with local council or financial service providers who have historically had redlined communities.

Conn’s plans to anchor the New London community have always been important, Singer explained: â€œThis culture has been around the College for a long time, and I think it’s very powerful in involving students in different ways with the community. community. “

â€œWe are delighted to be part of this ambitious national enterprise,â€ said Bergeron. â€œThe Mellon grant builds on Connecticut College’s long history of community action and public policy. The focus on long-term reparations and change aligns with our strategic goals of full participation and with our mission to educate students to put the liberal arts into action as citizens of a global society, a mission that has never been so critical.

Bergeron is currently chairman of the board of the Council of Independent Colleges, an association of nearly 700 higher education institutions, which supports the four CIC member colleges participating in the grant.

At the heart of the project is help from Conn’s Holleran Center for Community Action, which connects the campus to the community through social activism and civic engagement.

â€œAs a native of New London, I have always believed it was essential that the college continually strengthen its relationship with the local community,â€ said civic engagement and communications coordinator Clayton Potter, who helps in all facets of the project, including helping to train high school students in narrative interviewing and learning about the history of New London.

â€œIntentionally and frequently inviting members of the New London community to take advantage of college resources is what makes Connecticut College part of the community, not the ‘college on top of the hill.’â€