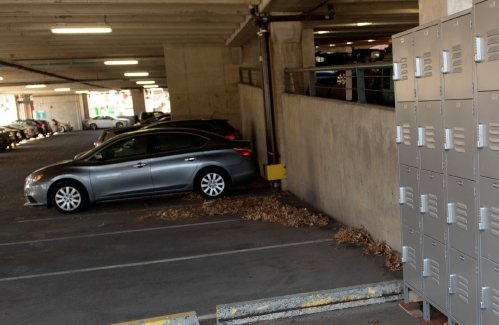 My tour: for compact cars only

Have you ever paid attention to those prominent signs in some parking lots that say “compact cars only?” ” Neither do I. If I finally spy on a vacant spot after making my way to the sixth floor of the garage and somehow can maneuver my midsize sedan there, then my midsize sedan is considered a compact car.

Now my midsize sedan could express its concern. He might emit a slow series of beeps, as if to say, “Hey, Ben, this place looks a little cozy.” Just be careful, okay? Then as I whip the steering wheel back and forth while frowning and squinting (maybe not necessary to squint and squint for basic parking, but when you find yourself doing an advanced parking exercise, doing both is absolutely essential), the beeps can go from measured to manic.

My car and I shared this experience, again, in a parking lot in Bridgeport, Connecticut recently. “Beep beep!” my car was screaming at me frantically as I gently guided her into a space that welcomed her like pants with a 38 inch waistline fits the waist of a man who won’t admit that his waist really is 40 inches.

Before I pulled away from my car for the night, I stood behind to admire the parking feat I had accomplished. “Why are you so nervous? I asked my car (not really, but please me). “We’ve been together for almost five years! We have been in dozens of parking lots! Haven’t met you in a parking lot yet! I know, there was that moment when you were three weeks old when I forgot to turn you off because you got that damn push button switch rather than the key switch I was used to, and you hurtled down a hill and you hit two more cars. But that was a long time ago! And, more importantly, that didn’t happen in a parking lot!

I ventured out into Bridgeport at night, not thinking about my car until we met again the next morning, at which point it occurred to me that maybe it wasn’t the scared of me who had inspired the frantic beep of my car when I parked it in that tight space. Maybe it was the fear of others.

“Did a ghost park this car?” I marveled as I examined the vehicle that now occupied the space next to my driver, a different vehicle than the one that had been there the day before. How could anything other than a shapeless mind have parked the car that was now sitting next to mine, pulled back so that its driver’s side door was facing my driver’s side door, with barely a space for a hair in between. they ?

I peered along the side of my driver, looking for the inevitable damage. No one could have parked so close to me without smashing down a door of my helpless midsize sedan, which had done its best to warn me of the peril I had subjected it to by refusing to recognize that it was not. , and never will be, a compact car. However, not a brand has soiled my car.

I could only assume that the person who pulled off this parking feat, far more admirable than any parking feat in my history, got out of his car as I was about to get into mine. Through the passenger door.

We’ve all seen the scene in the movies where the hero jumps out of a 90 mph vehicle to throw himself on the passenger side of another vehicle driven by the villain. The hero then throws the villain out of the vehicle and takes his place in the driver’s seat. I’m here to tell you that it’s a lot harder than it looks in the movies, even if you don’t have to jump out of a vehicle at high speed or throw a bad guy out of the driver’s seat.

I opened the passenger door and sat down. So far, so good. Then I took a deep breath and threw my upper body over the console in the driver’s seat. I didn’t perform this maneuver as easily as the action hero mentioned above. A knife pain went through my right side as my legs awkwardly parted. My left leg came to rest in its intended position on the driver’s side floor, but my right leg remained mostly on the other side of the car, having apparently decided not to cross the hedge just yet.

“Goodness!” I exclaimed (where ‘goodness’ is the lining of the real word unable to appear here right now), “I hope I haven’t broken something. “

If I had broken something, I might still be here. The Bridgeport parking lot is one of those garages where cars are piled up like sardines, but there never seems to be a soul in sight, which further strengthens my phantom driver theory.

But the pain from the stab wound turned out to be just a cramp and I quickly took I-91, starting the trip home.

I might not be that cavalier, however, the next time I look at a sign stating that the space I plan to park in is for ‘compact cars’ only. I might take a break if that beep changes from measured to manic because I really have no desire to improve my skills to immerse myself in the driver’s seat from a passenger side entry point. But I’m afraid I have to tempt fate. When was the last time you saw a parking garage sign claiming to reserve space for midsize cars only?