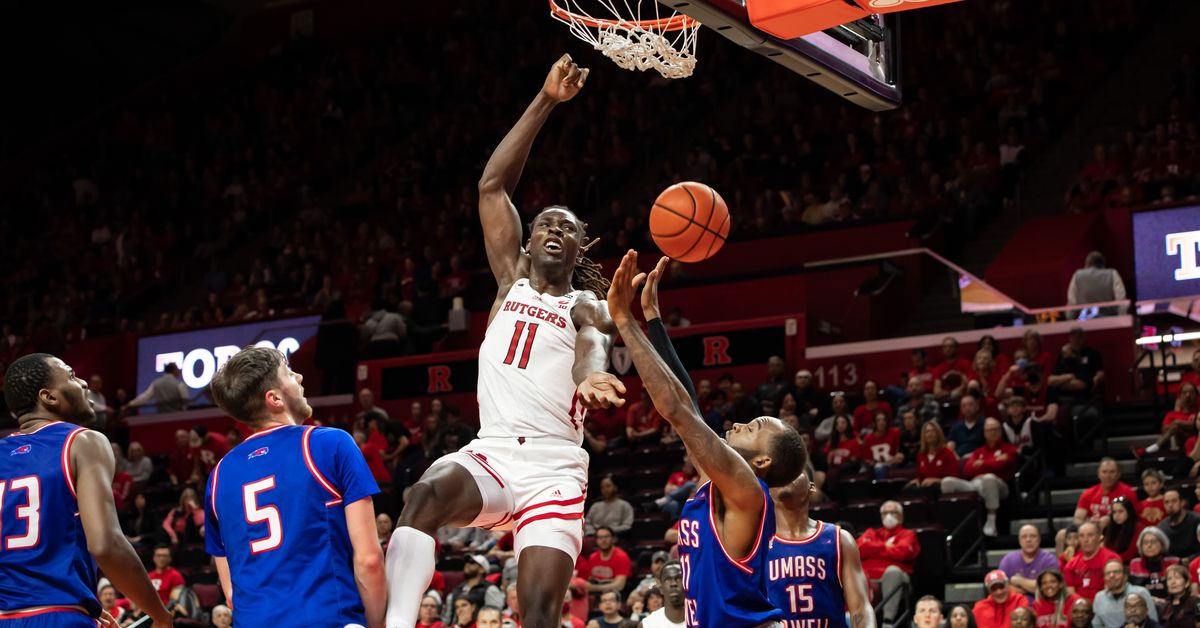 There will be plenty of tests on the schedule for Rutgers, but they haven’t happened yet. On Saturday, the first real test was thrown against the Scarlet Knights with the arrival of UMass Lowell in town.

The River Hawks picked up two blowout wins to start the season. That includes a 27-point win over Columbia, which Rutgers handled in its season opener. The Scarlet Knights built a 13-point lead before halftime and were able to hang on for a win.

Rutgers will now have six days to prepare to face Temple in the Hall of Fame Showcase at Mohegan Sun Arena in Connecticut. What did we learn from the third game that can be resumed on Friday.

This has been known, but it’s solidified at this point.

Cliff Omoruyi came into the season hoping to be one of the best bigs in the Big Ten. So far, he’s looked the part of a center that has an All-Conference shot. Again, it was mentioned that the competition wasn’t the best yet, but Omoruyi is dominating in the expected way.

Against UMass Lowell, Omoruyi recorded 22 points and 15 rebounds. He also added three blocks. Omoruyi is one of the best athletes in the conference. If there was a hit, he struggled to complete some lay-ups at times, but that will come as the season progresses.

What we saw was rebounding and solid defense. Omoruyi is averaging 16.3 points and 10.3 rebounds per game this season.

Derek Simpson is a weapon

Simpson struggled on the field but managed to reach the free throw line and went 10 for 10. It’s a skill that will benefit Rutgers, who have struggled on the line during the year. . Simpson showed flashy passing ability and some rim bouncing.

Whether Mulcahy misses a bit of time or is back on Friday, Simpson will continue to produce in the rotation, whether in the starting lineup or coming off the bench.

Cam Spencer is a real scorer

There are only a few players who have a knack for putting the ball in the basket at any level. It’s Cam Spencer.

The Loyola Maryland transfer leads the Scarlet Knights with 16.7 points per game. He’s shooting 50 percent from the field and is 7 of 14 from three-pointers and 11 of 11 from the free throw line. Against UMass Lowell, Spencer only went 3 for 9 from the field but was able to reach the line eight times.

During the offseason, Spencer’s arrival gave fans hope that the team would have another scorer on the roster. At first it certainly looks like it.

The depth is present for the scarlet knights

Caleb McConnell has yet to make his season debut, but Aundre Hyatt has stepped in perfectly. Simpson produces on the bench. Mawot Mag is strong on both sides.

Steve Pikiell has plenty of weapons to work with this season. The loss of Ron Harper Jr. and Geo Baker is made up for in different ways. As McConnell recovers from injury, Hyatt has 14.3 points and 6.3 rebounds per game as a starter.

This will be important in conference games. The Scarlet Knights will be tested against Temple and a road game against Miami, but there is plenty of talent to rely on going forward. Once McConnell is back, the big three with Omoruyi and Mulcahy will be there but the bench will also pack a punch.

Savings rates of 3% are no longer out of reach. Here’s where you can find them