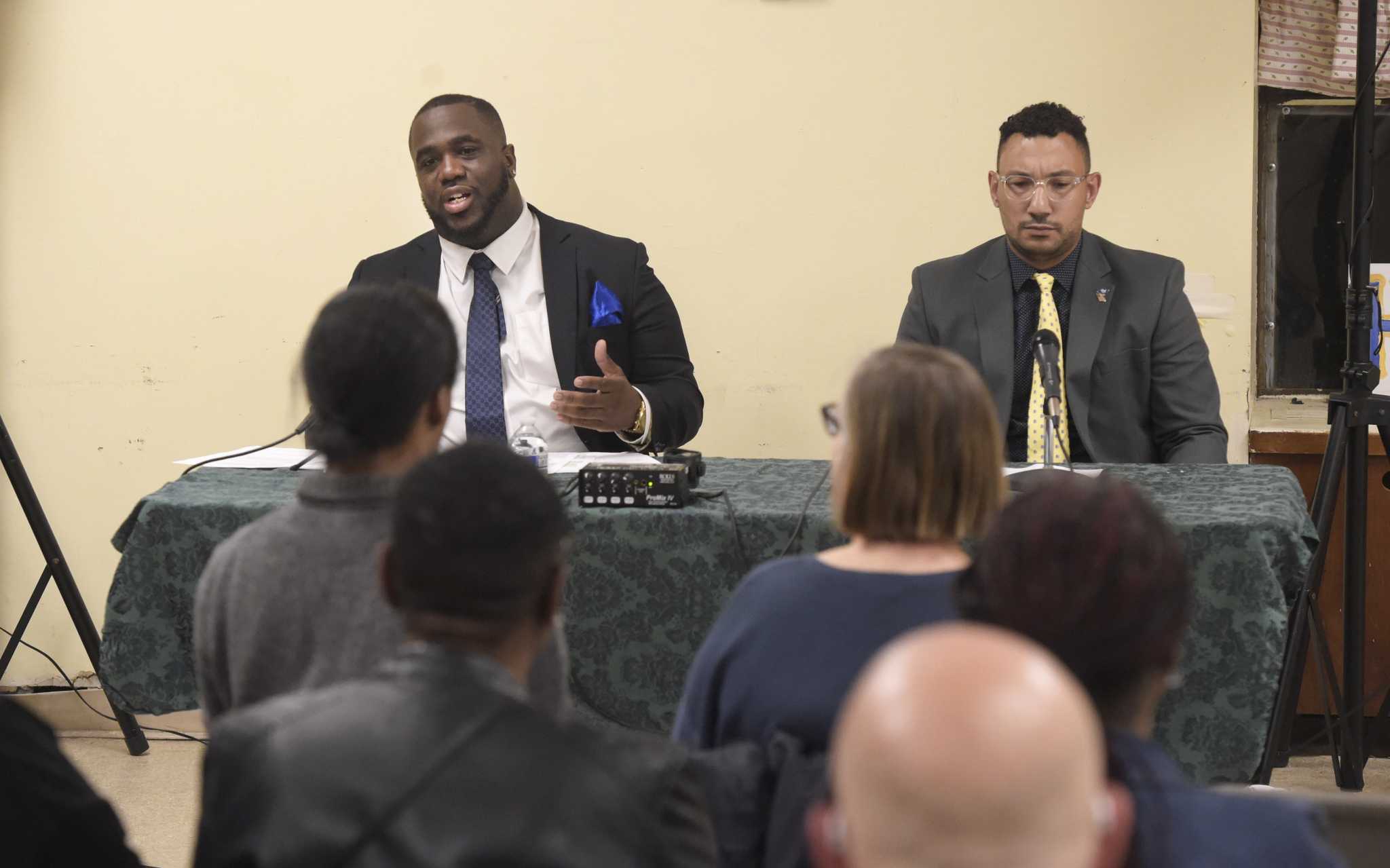 NORWALK — A former Common Council member and a resident who once ran for a seat on the panel squared off in a debate this week in State House 137th District.

Kadeem Roberts, who served on the council from 2019 to 2021, announced his candidacy for the 137th District post after incumbent Chris Perone announced this year that he would not run again. Perone held the seat for nearly two decades before choosing not to run again.

Roberts, the Democratic candidate, debated more than a dozen issues at a Monday night 137th District debate hosted by the Norwalk League of Women Voters at Cornerstone Community Church on West Avenue.

The Republican candidate, Luis Estrella, had previously run for a spot on the District A Common Council in 2021 and had never previously held elected office.

Topics of debate ranged from the role of police in communities, to whether the area needed more affordable housing, and whether convicted felons should be able to vote, a topic on which both candidates agreed.

“We are all human. We all make mistakes, but more importantly, we all have the same right to live a different lifestyle,” echoed Roberts.

Roberts completed a court-ordered domestic violence education program last year to suffer third-degree assault, interfere with a 911 call and dismiss the disorderly conduct charges against him.

Both candidates agreed on a woman’s right to choose whether to bear a child or opt for an abortion, but disagreed on the relevance of the issue, as Roberts said the right to be abortion is not protected by the state constitution.

Roberts and Estrella also agreed that state elections are safe and reliable and support amending the state constitution to allow early voting, as will be called for in the November ballot.

Following election security and abortion rights, candidate deals dwindled as Estrella was unable to answer some questions and the couple disagreed on what constituted the issues the most urgent in the state.

“Affordable housing is very important, but as I knock on doors I hear about inflation, women’s rights and gun safety,” Roberts said.

Estrella, however, said inflation was the main concern for community members.

“We knocked on different doors. Every person I knock on the door talks about affordability, how hard it is to pay bills, how hard it is to put food on the table. That to me is the most important topic we face in the state,” Estrella said. “As far as transparency goes, a lot of people here don’t really know who their state reps are because they never get emails, never get phone calls, nothing.”

When asked how the state legislature could provide more funding to Connecticut’s school systems and whether the state’s education cost-sharing formula needed to be changed, Estrella was unsure. able to answer because he didn’t know the formula and wasn’t going to “invent anything about it. ”

The cost-sharing formula was developed by the state to distribute approximately $2 billion a year in public education funding.

Roberts said the state needs to invest more in funding teachers and keep them in the district longer.

Estrella was also unable to answer a question about solutions to ensure that all municipalities in Connecticut have affordable housing options.

“We need to better distribute and prioritize cities and communities that benefit from developments. There are no specific plans in place to cover where affordable housing is, where it is going and where it is not going,” Estrella said before pausing and saying he didn’t know enough about the topic to fully answer.

Roberts said the state needs to focus on meeting the housing needs of seniors who are looking to downsize but stay in their communities and make sure developments happen in the right areas.

Abigail Brone can be contacted at [email protected]édiact.com.

Libraries have more than books: unusual things you can find