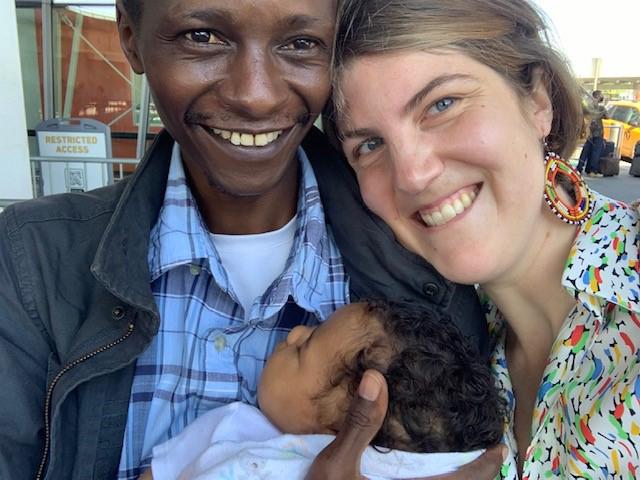 When my daughter Letitia was born on April 11, 2021, I wasn’t there to welcome her. I had done everything in my power to make it happen – I had sought the help of lawyers and even appealed to the US State Department. But when my fiancée Sarah gave birth, I was thousands of miles away in Kenya, barred from entering the United States. Why? Due to delays in the US immigration system. Cases like ours rarely make the headlines, but they affect many families and cause unnecessary suffering for Americans and their loved ones.

Sarah is an American citizen and I am a Kenyan national. We first met in 2017 while working with Africa Yoga Project. I was teaching yoga in Nairobi when Sarah arrived as a volunteer and we kept in touch loosely for the next year. To our surprise, we saw each other again a year and a half later, and then we crossed paths. With hesitation due to the distance and our different backgrounds, we fell in love. We started a long distance relationship at the end of 2018. In 2019 I visited her on a tourist visa and Sarah came back to visit me. We got engaged in October 2019. Five months later, Sarah was visiting Nairobi when the pandemic started. She remained trapped in the country for seven months, but luckily. Our relationship flourished and in August 2021 we learned that we were having a baby.

A month later, the Kenyan government ordered anyone with an overdue visa to leave the country. Sarah had no choice but to return home to Connecticut. I had no choice but to stay. Trying to follow all the rules, we had applied for a K-1 visa – also known as a fiancé visa – several months before. When we applied in February, we thought we would be together in the United States by September at the latest. But starting my K-1 process, it canceled my existing tourist visa – and prevented me from getting a new one. If I tried to travel on my existing tourist visa, even to be with my fiancé for the birth of our daughter, it would be considered fraud, and I would never be allowed to return to the United States.

We had compiled over 100 pages across multiple apps documenting our relationship. It included our text messages, emails, photos and statements from all of Sarah’s family members. There were many costs associated with this process, which is difficult for a young family just starting out. Still, we hoped the visa would be approved before our daughter was born. United States Citizenship and Immigration Services estimated five to seven months. Over a year later, we were still waiting.

I remember when Sarah called to say she was in labor. We were both nervous, excited and determined to support each other, even though there was an ocean and thousands of miles between us. I was scared holding my phone, listening and watching my wife in labor. And then I remember crying out when I saw my daughter for the first time, wishing I could hold her in my arms. Letitia was almost 3 months old when my K-1 visa was finally approved – 1 year and 4 months after I submitted the application.

I arrived in the US on Father’s Day 2021. Our meeting at the airport felt like it was created by Hollywood. My heart swelled when I first held her. I felt overwhelmed with joy to be reunited with my love and my family. Sarah and I got married shortly after in July 2021.

We are not alone in our predicament. About 1.6 million people are currently waiting for their green card. They spend an average of five years in this so-called “line”. But there is no order. The regulations are different for each person depending on their nationality and profession. For many Indian and Chinese nationals working in STEM fields, the wait is more than a century, according to the Cato Institute. The pandemic and Trump-era policies to reduce legal immigration exacerbated the problem as immigration offices operated at reduced capacity. We are grateful that many of these policies have been repealed and we received my green card sooner than expected, in May 2022.

Sarah, Letitia and I revel in the blessing of being together every day. After years of timing our conversations around time zones, checking immigration status, and calling senators and lawyers daily; wiping tears on the phone, we are physically together. Nowhere to go, no petitions or phone calls to make, no fees to pay, no more waiting for some unknown day when we’ll be together.

Words cannot describe the relief and gratitude we feel every day to be in the same place. To be able to take care of both my wife and my daughter through my cooking, my drumming and my love, and now that I have my green card and can work, very soon I will be able to contribute financially.

We wish that all other families can experience the unparalleled feeling of being reunited and finally living together freely. We advocate for faster immigration processing and systems that prioritize family reunification.

Isaac Mukwaya is a yoga teacher from Kenya. He lives in Connecticut with his wife Sarah Hill and their daughter Letitia.

UBS advisor on what rising interest rates mean for consumers