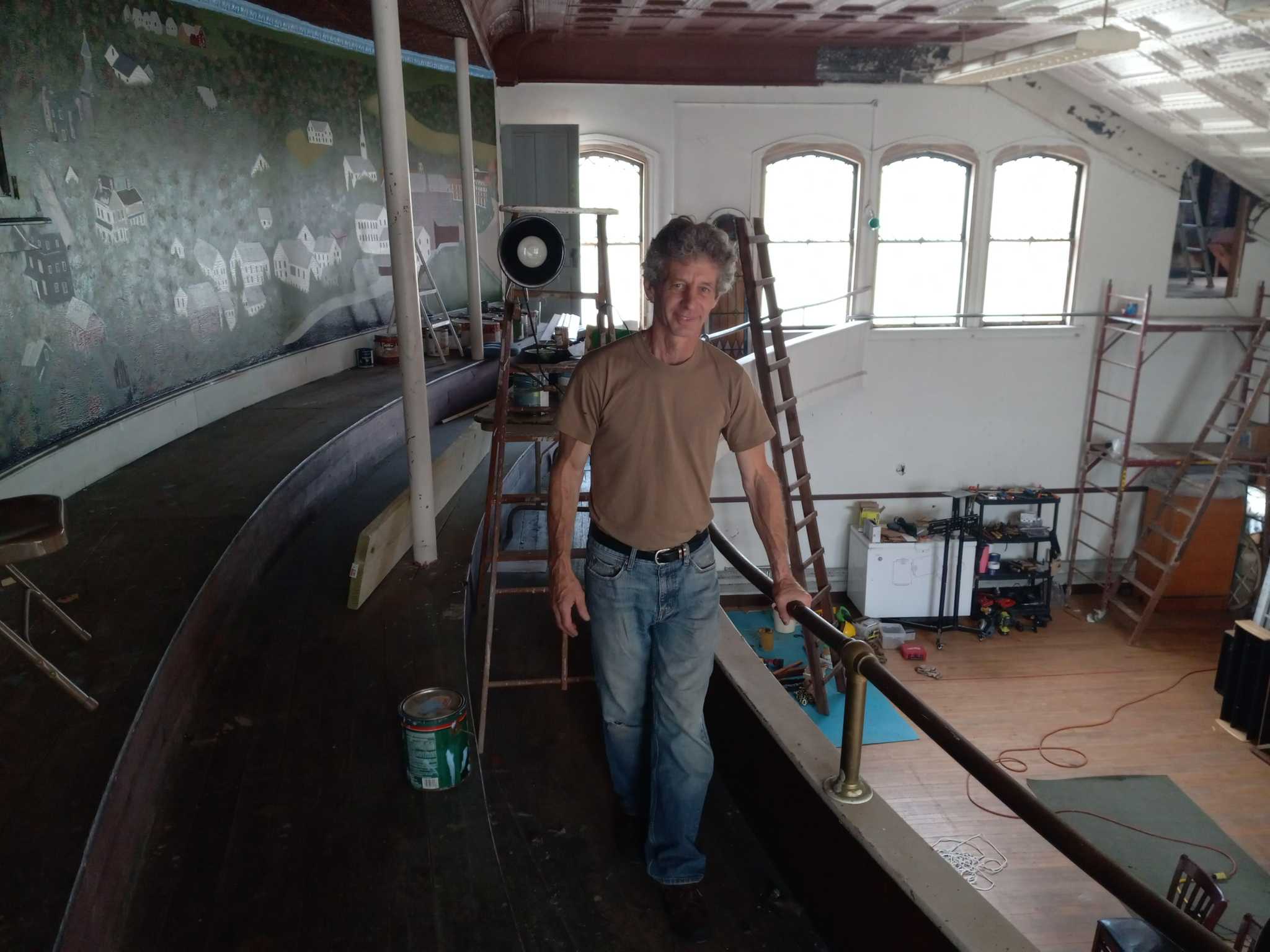 Transformation underway at the former Red Men Club in Winsted

WINSTED — At its peak, the Red Men Club was a bustling enterprise for more than 400 members, who held their meetings at 15 Case Ave., in the basement of the old First Baptist Church.

The Improved Order of Red Men is one of the oldest fraternal organizations in the nation, according to redmen.org. At Winsted, the clubhouse had a bar, a large party room where teams of darts players competed, a large pool table, and a full kitchen. The club closed in the early 1990s, and only memorabilia and dilapidated furnishings remain.

But that’s all set to change by next year, now that resident John Noone has the building in his hands.

Noone bought it two years ago, with plans to open the Laurel City Playhouse and Concert Hall by 2023, providing performance space for dance, music and theater groups and individuals.

“We’re working on getting our permits right now and we’re doing a survey and getting our architectural drawings together,” said Noone, who along with his wife, Alla Kravchenko, wants to host artists and other performers who don’t. might not have reached the big rooms yet. “Once we have these in place, with a parking plan, then we can start the renovations.”

Renovations will not yet include the lower level of the circa 1880s church. Noone spent a month putting new wooden cladding on the exterior of the building, and is now focusing on the ground floor, a large sanctuary space with a balcony. On the second floor of this balcony, a party room once used by a dance teacher is filled with wooden theater seats, which Noone is in the process of refinishing, using the original iron hardware and a brown finish. and brilliant.

In the sanctuary, Noone envisions a modular setup to accommodate different types of performances. He wants to enlarge the balcony so that it wraps around both sides of the sanctuary, providing more seating and a view of the stage, which is also enlarged. The backstage area will also be expanded and another small balcony, with access to the attic, will become an observatory with glass walls, Noone said.

“It will be small and cozy, and people will be able to appreciate this building for what it is,” he said.

Already, he and local artists have installed a piece of Winsted history in the building – a hand-painted mural, based on a painting by local artist Sarah Harney, who lived from 1834 to 1924. The mural runs the full length of the balcony wall, depicting a downtown scene. Harney’s painting, “Winsted, Connecticut”, was painted in 1877.

“She was known for her landscapes and portraits, and this painting was part of her collection which was given to Princeton University — he’s still here,” Noone said. “This is the basic layout of his painting.”

Using what he has

Noone, originally from New Haven, moved to Winsted in 2010. He learned his carpentry and restoration skills from his grandfather, Antonio Ferraro, and applies those skills to many areas of the old church.

“We built rabbit houses together. … He could build anything, fix anything. I learned a lot from him,” Noone said of his grandfather.

“They’re very poor, but they don’t live their lives that way – they’re very proud and work very hard for what they have, and they were basically happy,” Noone said.

While there, Noone purchased a collection of hundreds of bags of brightly colored, beaded and tasselled Afghan rugs, now neatly stacked inside the theater.

“I have quite a large collection, and I realize now that they are very valuable. These are original; some of them were used for a dowry (when a girl marries into a new family),” he said. “We will sell them or give them to people who donate to support the theater.”

Carpet bags are just one of the collections that Noone uses for renovation. A collection of around 60 old stained glass windows, removed from a church being demolished, are being used to replace the church’s original windows, giving a colorful addition to the building. In a room in the Red Men Club downstairs, Noone and a few helpers clean every window, brushing away decades of dust and grime to reveal old panes of green, yellow, orange and blue glass. Some have already been installed on the first floor staircase.

“I also found another collection of theater seats and old chairs, and these will be used in the performance space,” he said.

Noone has chosen to be a for-profit company and plans to apply for grants to continue his work. He applied for and received a $10,000 grant through City Manager Josh Kelly’s recent program using money from the American Rescue Plan Act, and hopes to get another through the Facade Improvement Grant program. from the city.

“Josh came in the other day and told us that the Northwest CT Arts Council also had grants available, so we’re going to make a proposal for that,” he said.

Kelly announced the first round of business start-up grant recipients in April. Another round is planned for June. Each applicant must submit a business plan explaining how they will use the funding and will be given a deadline to get their project off the ground. No one wants to involve as many people as possible in the community.

“We want it to be a community project,” he said. “Whether it’s moral, voluntary or financial support, I will need the community to make it a success.

The First Baptist Church closed in the 1950s when it joined another congregation, and the building eventually fell into disrepair. The tall steeple was destroyed after being struck by lightning, Noone said. But because the church was built in the late 1800s, its bones are strong and the building was made to last.

“They didn’t use nails, they used wooden dowels,” Noone said. “It’s amazing how it holds up. It’s very solid. A modern engineer would be amazed at how this place was built.

Kravchenko, who loves daily walks, was once approached by a resident whose house she stopped to admire.

“He said, ‘I have something to show you’ and he came with a cross that was on top of the bell tower,” she said. “He told me after the lighting hit the steeple, he was there with his dad and saw him lying on the ground, and he just grabbed it – he’s had it this whole time He said when we finish the building he will return it.

So far, the response from the townspeople has been very positive. An older man came one day and told Noone that when he was 14 he had been baptized by immersion in the sanctuary. Others shared their memories of the Red Men Club, and anyone who visits Noone while he’s at work is thrilled to see the activity, he said. “People had a real reaction to that,” Noone said.

“I like how we’re so close to the senior housing developments in the city, and I want them to be able to come here – they can just walk,” Noone said.

Noone and Kravchenko want the theater to be part of the community. “We’re not looking to be a big venue, like Infinity Hall or Warner’s,” he said. “That’s where the little guys, those starting out, can come and perform.”

Colorado leads in bank robberies in 2021; some blame fentanyl