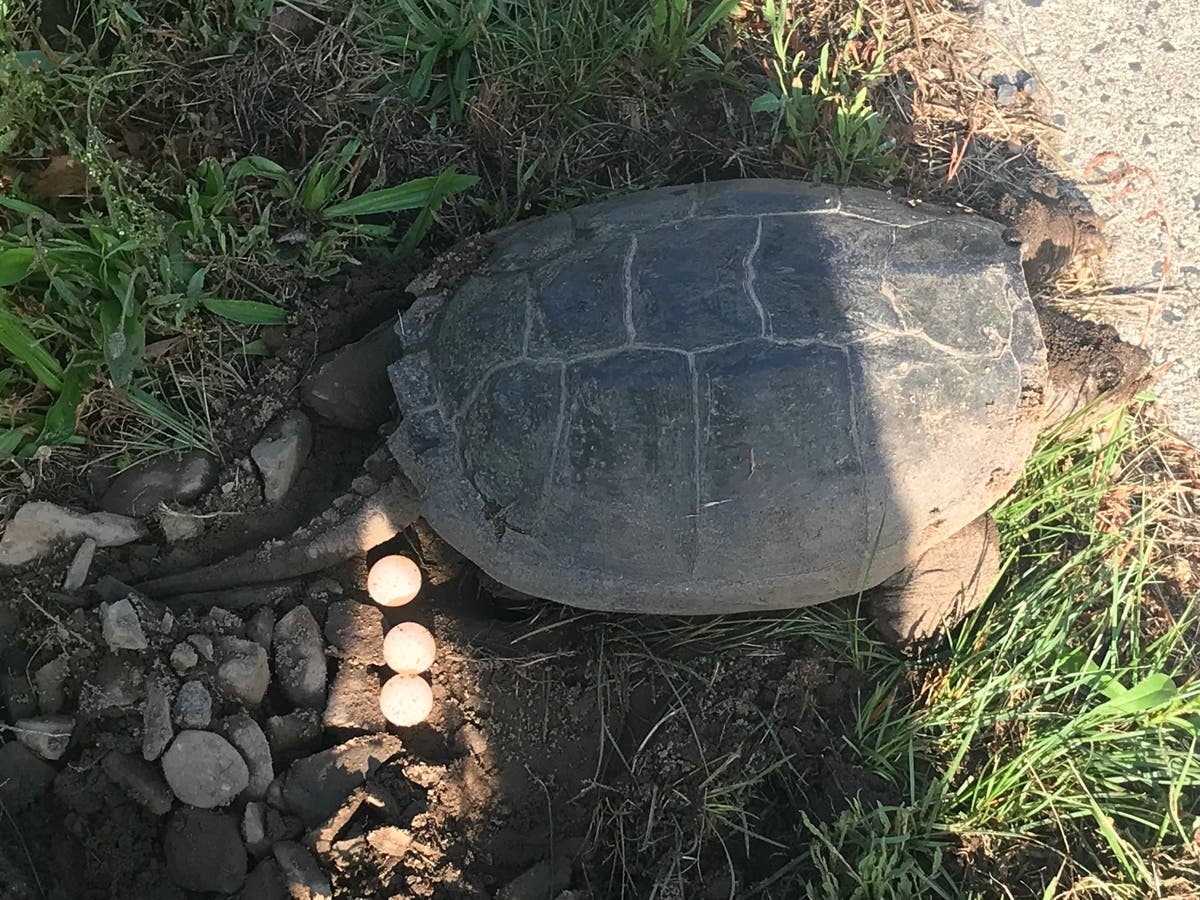 The turtle was spotted performing the deed around 7:45 a.m. on East Main Street in the Rockville neighborhood, not far from the Pitney Park pond.

The timing is in line with a warning issued by the Connecticut Department of Energy and Environmental Protection on May 23. He advised residents to be on the lookout for turtles crossing the streets. May through July is nesting season for many turtles, and egg-bearing females travel across land, and sometimes roads, to find the perfect spot to dig a nest and lay eggs, officials said. DEEP.

Aquatic turtles also leave the water in search of terrestrial nesting sites, according to DEEP officials.

“Connecticut’s landscape is very fragmented by busy roads, and many turtles are forced to travel great distances – and across roads – to find suitable nesting habitat,” said Division Director Jenny Dickson. DEEP Wildlife. “Helping a turtle cross the road can be the difference between life and death for the animal and for future generations, but your safety comes first. Only help a turtle on the road when you can. do so safely. do not attempt to stop traffic.”

She added, “Research has shown that turtle populations across the United States have unusually high proportions of males because so many female turtles are killed on the roads.”

Humans lending a helping hand should always keep the turtle pointed in the direction it is heading, DEEP officials said. Turning around with a turtle will only provoke another attempt to cross the road, they added.

Here are some other tips:

The turtles are long-lived, take a long time to reach sexual maturity and have low survival when they are newly hatched, DEEP officials said. Because of these attributes, turtle populations cannot compensate for losses from adult mortality without suffering long-term consequences, they added.

DEEP officials said: “With turtle populations requiring high levels of adult survival, each individual – especially the adult female – is important to the stability of a population. This concern has been even greater in recent years. because many American turtle populations are becoming increasingly fragmented, isolated and In your travels, if you encounter a turtle on the road, just remember this motto: give the turtles a “brake” and help them to cross if it is safe.”

Officials said residents aware of a certain stretch of road where large numbers of turtles regularly cross should notify the DEEP Wildlife Division by emailing, with location information, to [email protected] gov.

Officials said residents should resist the temptation to pick up a turtle for any length of time, including keeping it as a pet. Turtles should be left in the wild, they added.

“The removal of individual turtles from the wild, including hatchlings, can have a huge impact on the local population,” Dickson said. “Each individual is important for population stability. Keep in mind that caring for a pet turtle is not as easy as you might think. Turtles need temperatures, a diet specific food and lighting for digestion and shell health Cages should be kept clean as turtles can carry salmonella Also, turtles are long-lived – 50 to 100 years for a box turtle the East, the collection and possession of which is illegal in Connecticut.
The novelty of having a turtle as a pet tends to wear off, leaving it up to the owner to decide what to do with it, Dickson said.

“Captive turtles, whether collected from the wild or purchased from a pet store, should never be released into the wild,” Dickson added. “Released turtles rarely survive, frequently introduce respiratory or other undetectable illnesses into wild populations, and, in the case of non-native species, can harm native turtle populations.”

She also said. “The best way to appreciate turtles is to see them in their natural habitat. Help keep wild turtles wild and leave them where you find them. Instead of collecting turtles, take pictures instead.”

Armed and untrained officers are still patrolling some NJ towns